If you have read my blog, you will know that I have posted three Ride Reports so far, all done in 2007 / 2008. In case you missed them, here they are:

Ready for a (GS) Challenge?

Those three have been my biggest trips of 2008, but obviously I did some other riding during the year as well. I am not going to create a blog post for every single ride that I do, but I will post a “Recap” of every year, starting with 2008. In these “Recap” posts, I will cover all the other interesting rides / travels and things that happened outside of the main ride / travel reports. Think of it as filling the gaps.

Here is an interactive map of all my travels in 2008 (I exclude daily commuting) – you can zoom in and out, and view in full screen mode, just click the map)

As mentioned in one of my earlier posts, I decided to join the Pretoria BMW Motorcycle Club in January 2008 to get more involved in riding and to get to know more people interested in the same things I was getting interested in. The biggest advantage of this move was that I have met the best people and made some lifelong friends! The club also did monthly rides, and this got me more and more into riding, and my confidence grew with each ride.

My very first ride with the club, we were only seven riders on that ride. A few years later, these rides became so popular that there was 40+ riders on a ride!

We visited various places all around Pretoria, and the riding and company was always top-notch.

During 2008, I got hold of a little Honda CRF230F Enduro bike. My thinking was that more enduro riding would improve my Adventure Riding, and it certainly has. The only issue was finding time to ride between all the other riding! The main problem though was transporting the enduro bike to where I wanted to ride. I did not have a bakkie (Pick-up) or a trailer. So this proved problematic. I eventually sold the enduro bike for this reason. At least I did manage to go on a few rides, and loved every minute of it. You can see that even a KTM950SE can be an enduro bike, just don’t go swimming with it! 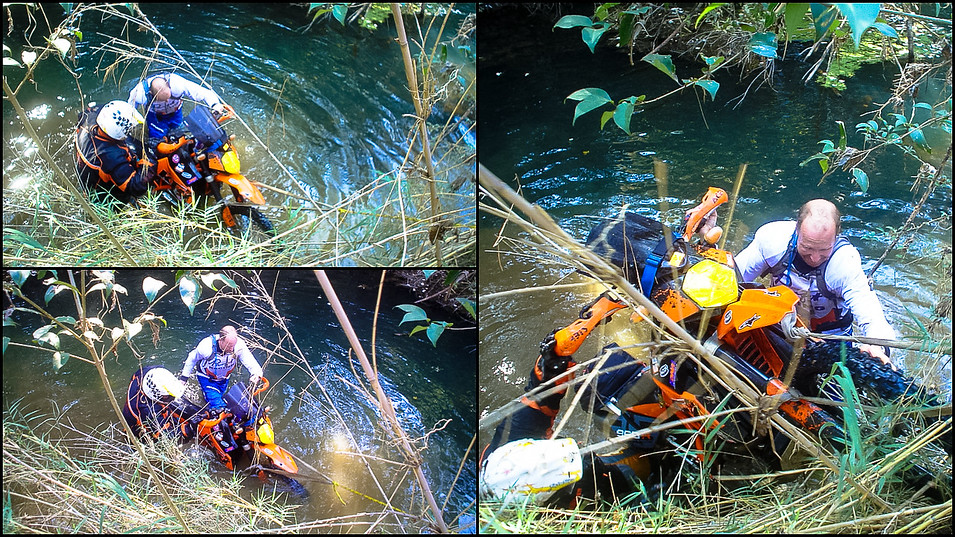 During the winter, I hooked up with my friend Sephton and his KLR yet again and we decided to ride some mountain passes over the Drakensberg Escarpment between the Freestate and Kwa Zulu Natal. We rode a bunch of awesome mountain passes. I also did my first trip through the spectacular Golden Gate.

During 2008 I also visited the annual AMID motorcycle show in Johannesburg. This was my first time at such a big show and it was awesome to see all the motorcycles and all the stuff you could blow all your hard-earned money on! There were bikes and accessories for every taste under the sun. It was really a worthwhile event to visit!

It was also at AMID where I met this cool chick for the first time, I would never had guessed that we would actually become very good friends. If you do not know her, have a look at her blog:  The Adventures Skinny and Kraai

I did not only do motorbike riding in 2008, I also did something that I never thought I would ever do…..Skydiving! I must admit, I am very glad that I did it, but I would not really do it again. It did not really grab me and I don’t get what all the fuss is about. I mean it’s nice and all, but not really my thing. I would rather ride my motorbike to some dodgy shebeen and sit under a tree drinking a beer with friends than jump out of a plane…..

So there you have it, a brief summary of my 2008. This was a year of many firsts for me and the stepping stone for so many things to come.  I was well and truly bitten by the travel bug, and mainly the motorcycle travel bug!